Details are still a bit sketchy, but news reach me this morning that mega popstars Justin Bieber and Taylor Swift are going to film the music video for an as yet unreleased duet on Islay. From what I understand they recorded the song (a love ballad) two years ago and have now decided to release it. Of course the song needs a video, and this is where Islay comes in…

The two superstars wanted something a bit different from the usual polished boredom of a pop video. On a Zoom call with Craig Ferguson (while now an American citizen he of course was born and grew up in Scotland) they got talking about it and Craig suggested they might want to take a look at Islay.

They seem to have taken to his suggestion and are now planning to travel to Islay once Coronavirus restrictions are lifted and they and their crews can safely visit the island and film the video.

Likely locations include Soldier’s Rock, Kilchoman beach, Sanaigmore Bay, Finlaggan, Bowmore (in particular with the Round Church in the background), but there’s also talk of an excursion to Jura for views of the Paps of Jura and the Corryvreckan whirlpool.

I’ll keep you updated as this story develops…

While I preparing my venison burger on my Fyne Venison Weekend I thought it would be nice to listen to some Islay music. Luckily the YouTube recommendation algorithm (and that I’m subscribed to him) suggested a nice video from Shane MacKinnon he uploaded today. Here he is with Donnie and Niall at the Islay Hotel in 2019:

And there’s more, as here he is with Kyle and Ciara at the Port Charlotte Hotel a little bit earlier in 2019:

For even more take a look at Shane’s YouTube music channel and while you’re there subscribe to it.

As mentioned previously the Islay Sessions 2020 had to move online due to the ongoing Covid-19 pandemic. Originally the plan was to hold them on the original weekend in November, but for various reasons that didn’t work out and the event had to be pushed out. Two days ago as of writing this it finally happened and the live stream went ahead. I put on my finest tartan, poured myself a wee dram and sat down in front of the computer to watch. While of course not as good as a real live event it was still a great evening! All credit to the organisers and the musicians for making this such an enjoyable event.

Greig Shaw was our host, I believe from his garden shed, which he had very nicely decorated for the event. Greig led us through the evening, talking about his late brother Fraser in whose honour the Sessions are now being held and very ably introducing the musicians. The musicians were be Daimh, Maeve MacKinnon, LB Salter & Jenn Butterworth and David Foley & Jack Smedley. Of course there was also a prize draw with some rare whiskies and other goodies.

The individual concerts were pre-recorded, which I think was a wise move. I’ve attended other online concerts, which were plagued with problems, sound and image being out of sync and more. Here the stream worked well and it was a joy to hear the musicians play as well as talk about their music.

As I had hoped the live chat was available, which I found very enjoyable. A lot of people I know personally as well as virtually were chatting while listening to the concert, many of the musicians joined in as well. Memories were exchanged, virtual rounds bought and more.

If you missed it or would like to see it again the Fraser Shaw Trust has made the whole event available on their YouTube channel (don’t forget to subscribe, if you haven’t yet):

Thanks again to the Fraser Shaw Trust, all the organisers and all the musicians for such a wonderful evening. Hopefully we can see each other again in person soon for some real live music!

Same as so many other events this year the Islay Sessions 2020 will take place online. They will also be a bit shorter this year, taking place on Saturday 21/Nov/2020 in the evening. However, the line-up is as good as ever with some familiar faces (as in, they have performed at previous sessions) and some new artists. Today the organisers uploaded a short teaser:

This years sessions will be broadcasted live on the Fraser Shaw Trust YouTube channel, starting at 19:30 on Saturday 21/Nov/2020. The musicians performing this year will be Daimh, Maeve MacKinnon, LB Salter & Jenn Butterworth and David Foley & Jack Smedley. I hope we will be able to use the live chat function, while not the same it would allow us to chat with the musicians and listeners, something I’ve always really enjoyed at the real live sessions.

Get your tickets and with it entries to the prize draw (including for a rare Bruichladdich valinch) online, I understand you can get as many as you want. For more information follow @TrustFraser and @IslaySessions on Twitter, if you’re on Facebook you can like TrustFraser on FB and Islay Sessions on FB.

Hope to “see” you there!

Some new media from Islay to write about. Back in August the This is Islay podcast was launched. Its goal is to bring you voices from Islay, news and events with interviews from the community. It is intended for both locals and listeners further afield to give an insight into what is happening on Islay and how the community experienced events. The intention is to complement other news sources (e.g. The Ileach), not to compete with them.

As of writing this two episodes have been published, Welcome to This Is Islay Fàilte a chàirdean and Islay Resilience and A Trip To India. The below embedded player should list and allow you to play the most recent episodes (as of writing this the two mentioned ones): 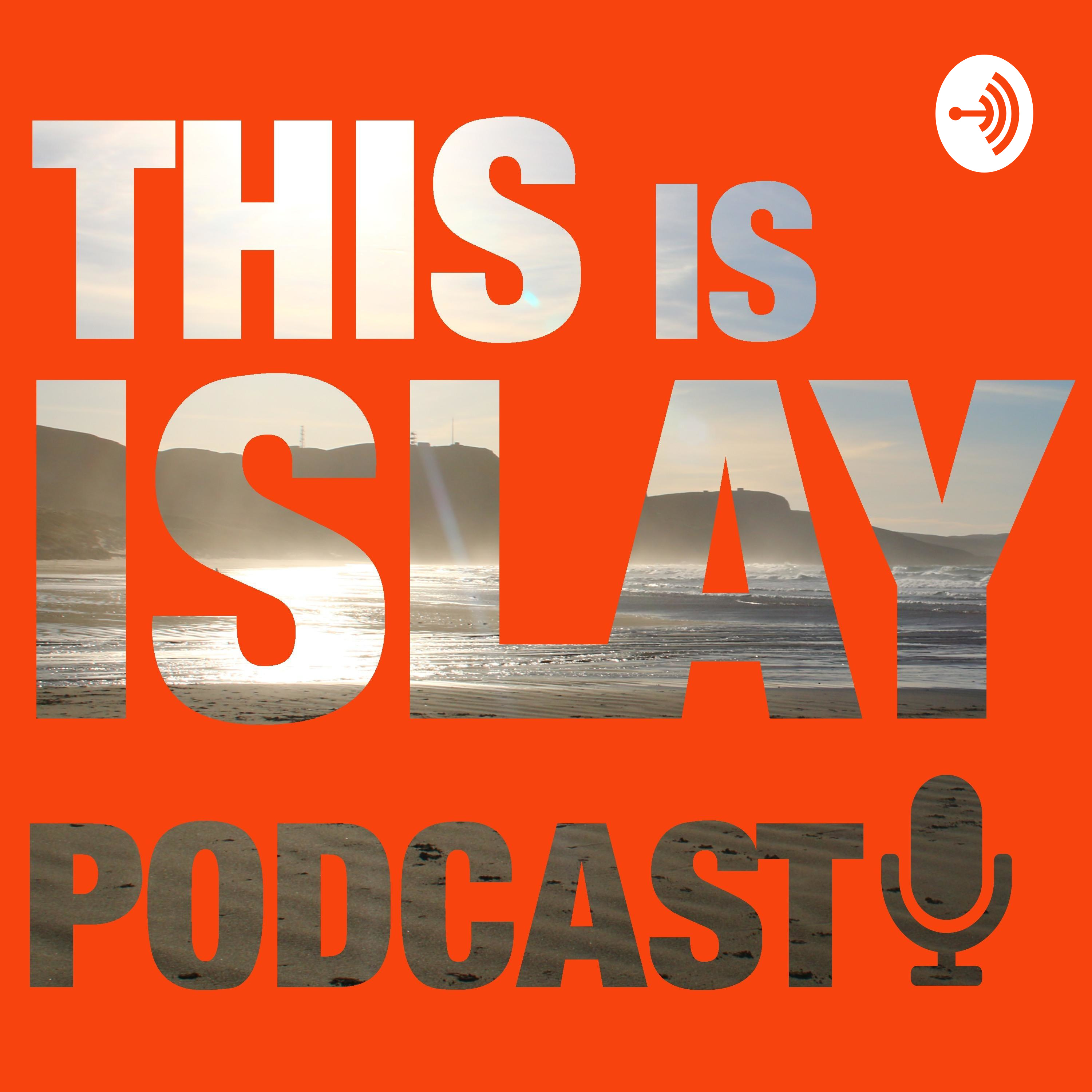 Òran Mór and More Cyber – This Is Islay

I hope you’ll enjoy the podcasts as much as I did and will subscribe to them (I’m using Google Podcasts, which works really well for me, but various other services including Spotify are available). With the latest developments around Covid-19 I found the information about the Islay Resilience Group very interesting and how it will help with possible future developments. But of course there are plenty of other interesting topics as well.

Regular readers might remember me writing about Gráinne Brady’s debut album just over a year ago, launched at the Islay Sessions 2018. Hopefully there will be Islay Sessions 2020, be it live on Islay or virtual (Fèis Ìle 2020 is moving online), as I’m hoping we will get to hear more from her there. Why? Because Gráinne is currently finishing her second album. I should have posted it earlier as now there are only a few days left, but if you’re quick you can still support her in fundraising to finalise and launch the album:

If you’re interested in supporting her go to Gráinne’s Indiegogo campaign for Newcomer and make your choice which goodies to pick (depending on your contribution). They range from digital downloads over signed CDs and/or launch tickets to a house concert.

Just over a week to go until the Islay Sessions 2019, taking place 22-24/Nov/2019 (Fri-Sun). As of writing this I believe there are still some tickets available, but not for all events (I think the Friday is sold out). So who will be there this year?

The one I’m most looking forward to is Claire Hastings. Claire was scheduled to perform last year, but unfortunately had to cancel as she lost her voice, rather important for a singer. I’ve bought both of her albums and have listened to them many times. Here’s one of my favourites:

Another one is this one, although I hope nobody will miss their boat on the way to Islay:

Next on my list are Eabhal, some of the members I know from previous Islay Sessions. Here’s a nice taster for their music:

The one I know least about is Kim Carnie. I will find out about her during the Saturday concert as well as on Friday where she will be performing with Laura-Beth Salter, Innes White (which I both know from previous sessions) and Calum MacCrimmon as VOX (no website I know of).

Very much looking forward to a great weekend with lots of great music, meeting old and new friends!

Obviously a bit of rain isn’t going to stop the Islay Pipe Band from performing, plenty enough rain on Islay to be used to it. Here they are playing for almost a quarter of an hour in a rainy Buchanan Street in Glasgow, recorded by Eric Traynor during Piping Live 2019:

PS: I noticed there’s a man (blue jacket, green backpack) going round doing something with some kind of instrument at the drones of the pipers while they are playing. What is he doing there? Is he helping them or distracting them?

The Scottish west coast is probably one of the best places in the world for a sailing holiday. Stunning landscapes, beautiful bays and lochs to anchor, ever changing views (and weather), what more could you want? Charlie Hitchen did just that and recorded their adventures in a nice video. The first couple of minutes cover Islay, Jura, Oronsay and Colonsay:

Lots of traditional music in the video, including some recorded during a session at the Islay Hotel in Port Ellen (with some of the usual suspects….).

This weekend I’m going to see Ross Ainslie and Ali Hutton (supported by Jenn Butterworth and others) at the south coast of England. Which inspired me to write another post about an artist I got to know through the Islay Sessions (which makes it a post for this blog). In case you’re wondering what the connection is: Brìghde has played together with Ross (not sure if she has played with Ali as well), here’s a nice recording:

But now to the real topic of this post, to Brìghde Chaimbeul‘s debut album, The Reeling. It was published in January 2019 to very positive reviews, for example in the Guardian. I’m not sure if she played any of it during the Islay Sessions in November 2018, but what I heard certainly motivated me to buy the album on release day. Here’s a (rather low quality, as it was recorded with a mobile phone) short snippet from her performance at the Islay Sessions in Bruichladdich Hall (my lack of musical skills don’t allow me to identify the tune):

Back to the album, it’s available on various download/streaming services (I bought it on Google Play as that’s what I use mostly) and you can buy a CD/LP from Rough Trade. If you’d like to get an impression before you buy you can hear some (or all if you have a Spotify account) here:

If that’s not enough, here’s a video with one of the songs from the album:

Proaig bothy on an overcast summer day, Isle of Islay

Loch Indaal lighthouse in the gloaming, Isle of Islay

Whooper Swans in a field near Sunderland farm, Isle of Islay

Lagavulin distillery from the A846, Isle of Islay