Happy New Year! As usual on New Year’s Day I’m listening to the New Year’s Day concert from Vienna while sipping an Islay single malt whisky (a Bruichladdich Port Charlotte valinch to be precise). Again as usual the waltzes and polkas, this year conducted by Riccardo Muti, are excellent, as is the whisky. What’s unusual this year is the chocolate I’m enjoying with it:

This year I’m having some Whisky Nibs from Chocolate Tree in Edinburgh. I can’t remember where exactly I came across them, I think it was some food or whisky blog. As the whisky they use is from Islay I of course had to order some. 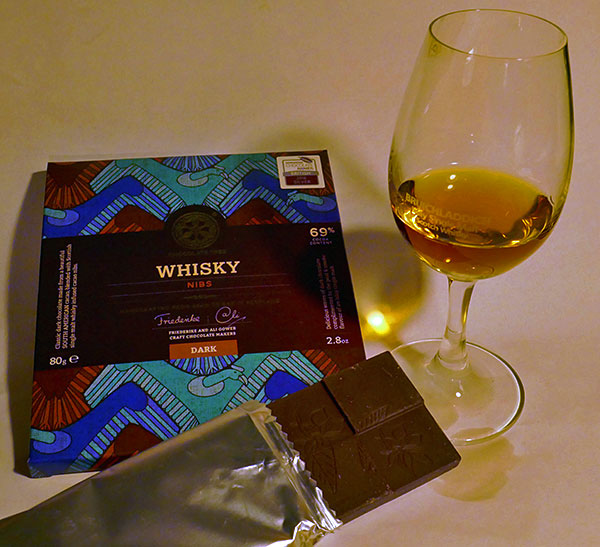 Islay Whisky Chocolate Nibs. And some Islay whisky.The chocolate is very nice, a dark chocolate with 69% cocoa content from the Marañón canyon in Peru. The nibs make it nice and crunchy. With the whisky content in the single digit percentage the whisky taste for me was quite faint but detectable. I’m sure connoisseurs with better developed and trained taste buds will detect much more. I think well worth giving it a try (once available again, when I was writing this it was out of stock. I’m hoping they’re going to produce more).

And with that I’m returning to the New Year’s Day concert from Vienna, where as I’m typing this they’re playing An der schönen blauen Donau.

It wasn’t the only Islay related April Fools, Laphroaig also joined in with this product announcement:

Islay Ales announced the opening of an Artisan restaurant. Although it seems it was destroyed in a storm just hours later.

If there are any other Islay related ones I have missed please let me and other readers know via the comments.

Regular readers of this blog will know that April Fools jokes have a long tradition on this blog, here’s the obligatory list of the previous ones (on the old blog):

And that’s enough Islay April Fools. Let me see what I can come up with next year (it is getting more difficult…)

I couldn’t help thinking of Colin Furze’s 20ft Fire Tornado Firework Launcher when I saw this (if you don’t know of Colin be warned, he’s a bit mad and has no interest in health and safety. Don’t do his stuff at home). I don’t know how Barin has achieved his video, although I suspect there might have been some computer animation involved. Anyway, here’s an unusual way to present a Lagavulin Islay single malt whisky:

I hope you enjoyed it, I found it quite fascinating watching it swirling around.

A few years ago (well, let’s call it a decade ago) I wrote a post about what I believed to be palm trees on Islay and Jura. Except … they aren’t palm trees. Someone corrected me in the comments, but sadly those comments have since been lost. Recently I came across a post discussing these trees, so I thought it’s worth revisiting the topic so that I have something to refer to when it comes up again.

As mentioned in the previous post the trees in question can be found in a variety of locations on both Islay and Jura, including around Port Ellen, in Bruichladdich and also in the community garden in Bridgend (at least back in 2007, when this picture was taken):

I must have had a hunch when I wrote this post and mentioned that the picture was from 2007. Sadly the tree has since been damaged in a storm, hopefully it will grow back to its former size. Many thanks to Steve Bavin of Islay Ales for the update!

On Jura some of the best known ones can be spotted near the Jura Hotel garden, outside of the Jura distillery:

So what are these trees really if they are not palm trees? Well, we can read from some people from New Zealand (who should know them, as that’s where these trees are from), when visiting Jura in 2016 they taught the distillery staff about them. The tree is called Cordyline Australis, or cabbage tree. In the UK it is apparently also known as Torbay Palm and Torquay Palm, although that still doesn’t make it a palm tree. Among other things it doesn’t fare well in hot tropical climates, an area where you would expect palm trees to thrive.

So now you know, may be it will be helpful in a pub quiz one day?

Incoming wave in a moody Saligo Bay, Isle of Islay

Light and Dark Paps of Jura from Bowmore, Isle of Islay